As you may recall, a former Cyrsti's Condo post featured a transgender "craft" theme.

How the idea started was a post I saw from the "Daily Pilot" on the return of the 1990's cult classic "The Craft". It follows a coven of teen witches. A casting call last year sought a transgender actress for one of the four witches in the reboot and came up with "Zoey Luna" (below) 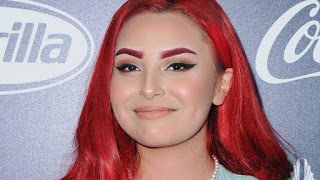 When she auditioned for the part, Luna didn't even have a manager. But Dante Alencastre’s documentary “Raising Zoey” chronicled her transition as a young girl in Downey and premiered at Outfest in 2016. She followed up that project by appearing in the first episode of the HBO’s four-part docuseries “15: A Quinceañera Story.”

In 2019, it was announced Luna would join the quartet of four teen witches.

In its latest annual report, GLAAD found that none of the eight major studios released a film in 2019 with any transgender characters, much less Latinx ones. This year will be different thanks to “The Craft: Legacy” alone when it arrives Oct. 28 to video on demand.

Finally, Luna said: The Craft needed a type of queer energy,” says Luna. “I’m really grateful for all the other trans kids that are going to get to see this film.”