What Was I Thinking/

I still can't get enough of the decade just past. The more I think of it, the more I remember doing crazy things. A few I remember vividly.

When I first started seriously down the feminine road, very early I decided I really didn't like the gay bars I was going into. It was about that time I discovered two small lesbian bars I began to frequent. One of which was the equivalent of a dyke biker bar. To say the least, they hated me there. The other was a different story and was the venue where I was strongly encouraged to sing karaoke by a super butch lesbian in a cowboy hat. I was also told one night by another lesbian I was pretty cute and maybe I should go home with her.  The major problem was I had a spouse to go home to!

Them again, there was the one evening I will always regret not being able to experience. That night  a group of stripper were supposed to entertain at the bar one night. Unfortunately, my wife was due home and I had to get back and change back into my male self.

Along the way, a few guys (including one trans guy) did enter my life. It was quite the adjustment and one it turns out I didn't have to accept. Every time I turned around, it seemed my life pushed me towards lesbians.  One of the highlights was acting as a "wing person" for one of my lesbian friends.

About this time too, as I have written about before, is when I met Liz. I was coming out of an intensely sad period of my life. I had just lost my wife of twenty five years and three out of five of my closest male friends to heart disease and cancer. I met Liz on an on-line dating site eight years ago and we have been together ever since. 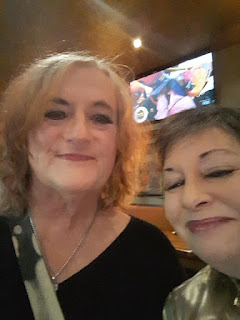 The final point I need to make was, how difficult the decade really was. As with anything else in life you remember the upside and have a tendency to downplay the downside. Like the time I went to a downtown urban summer festival one night in Dayton and another time I went to a Christmas festival in my favorite boots, leggings and sweater. I remember the excitement and satisfaction of living the feminine experience but not the loneliness of doing it alone.

The only words of wisdom I can offer are, no matter how lonely and lost you are, if you don't keep putting yourself out there, nothing will change!