Regardless of all the anti LGBTQ hatred being spewed from the White House, there were positive results in elections this week.  In Kentucky, the home of such notables as Moscow Mitch McConnell, the Democratic nominee for governor managed to narrowly defeat the solidly trumper Republican incumbent. Which hopefully bodes well for the upcoming presidential election.

Around the country, After a string of successful general and special elections, the number of LGBTQ elected officials in the U.S. today stands at 698 — the highest number ever, and an increase of nearly 25 percent over last year, according to the Victory Institute, which tracks openly lesbian, gay, bisexual, transgender and queer elected officials. 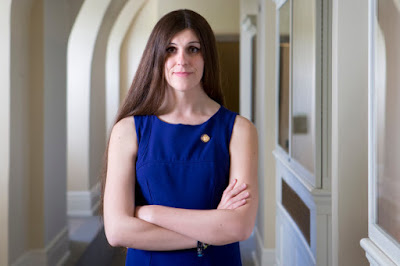 From the New York Post:" Danica Roem, the first openly transgender person to be elected and serve in a state legislature, was reelected to her Virginia seat on Tuesday.

Roem, a Democrat, bested her Republican opponent Kelly McGinn by a 57-43 margin.
When she was elected in 2017, Roem beat a longtime GOP delegate who led efforts to restrict bathrooms to transgender people.
Her opponent that year, Robert Marshall, sponsored a “Physical Privacy Act,” which was modeled after controversial bathroom legislation passed in North Carolina in 2016.
“Danica inspired trans people across the nation to run for office,” Mayor Annise Parker, president and CEO of LGBTQ Victory Fund said in a statement."
Reasons being given for the increase are more people are running, more are getting elected and more are coming out of the closet who are already serving.
Now all we need is a solid front from the "L,G and B's" to help the "T's" in our struggles.
at November 07, 2019