Due to the state of my life lately, this comment is actually several days old and includes another comment/picture from Connie. Much of it revolves around the concept of "passing" in a feminine world:

"Because of the work I do, I interact with dozens of people every day. It is usually they who start the conversation, as I'm basically there to water beautiful flower baskets, and people want to tell me how lovely those flowers are. I just reply with a feminine-sounding "thank you," but oftentimes I'm asked how I keep them so nice and lush. If I've passed up until this point, that's OK, but attempting to keep my feminine voice during a conversation, and keeping my feminine appearance during a longer face-to-face encounter lower my chances of passing with each tick of the clock (Is that what they mean by "clocked?")My philosophy on passing is based on passing muster. This may, or may not, include blending in. I pretty much draw attention to myself while working, but it's in a positive way. I realize that there are many people who may size me up before saying anything at all to me, and I'm confident that, for most people, I am passing muster. What I think is the best test of this is that I seem to be approachable. It's a lot different than interacting with sales people or servers, whose jobs are to be nice to the customer - whatever they may think about a trans woman. 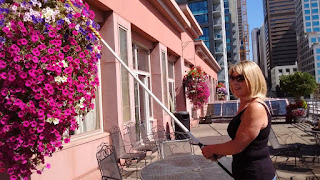 At one of the locations where I work, on the pier amidst cruise ships and smaller harbor tour boats, there are more tourists from all over the world than there are Seattle-ites, so I'm often asked for directions or recommendations on the best places to see or go to eat. I'm sometimes taken aback when a good ole boy from the deep south approaches me with such questions. I mean, he easily could have gone to the visitor center right there, but he chose to come to me. I think I have the longest conversations with these guys, because I want them to know that a trans woman can be just as approachable and engaging as anyone else. Maybe some of them don't even figure out that I am trans, but it doesn't matter. Every once in a while, someone will compliment more than just my flowers. I have sometimes been told that I am pretty, too. Women are more likely to be sincere in saying that, but I've heard, "the flowers are almost as pretty as you are" from men more often than I would like (men think they're so clever with their come-on lines). Even if nobody spoke directly to me, I could take solace in the mere fact that I hear, all day long, parents say to their toddlers in tow, "See, the lady is watering the flowers!" At least they're calling me a lady, and I'm sure their kids will grow up accepting that I am, as are all trans women."