Father's Day means many different things to most of us. For some, it brings back memories of our own father's, living or passed on. This is far from a scientific survey but I think for the most part, fathers of transgender women were emotionally distant from their children. My Dad was an excellent provider but was an emotional rock. He rarely let anyone into his inner self. Then again, he was a survivor of the Great Depression and World War II. 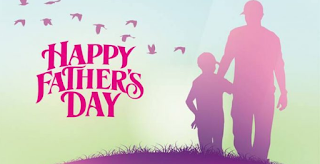 Also, you have those of us who have children of our own. Unfortunately, too many of us are disowned by our children. A true shame, the off spring never took the chance to learn the true selves of their father.

My daughter accepts me totally and many times I think I am one of the most blessed people in the world.

Early in my Mtf transgender transition process, we came to several mutual decisions including how she and my three grand kids would refer to me. My dead name went away and my new name was accepted without question. Also we solved the complex question concerning me becoming a "grand parent" not a grand dad. My daughter and I are cool with her referring to me as "Dad" in private and "Parent" in public.

I hope, as I do every year here in Cyrsti's Condo, this Father's Day finds you safely in touch with your family, or have reached out to a new one in the LGBTQ community.
at June 17, 2018