First of all, I am pretty much a technologically challenged old geek. Thus, one of the weekend challenges was learning how to navigate around Columbus, Ohio using the Uber car service. After I learned how easy and relatively inexpensive it was, I found I could relax much more seeing as I didn't have to worry about drinking and driving.

Every year, Liz and I make it a point to going to a venue called Club Diversity. It's in a old Victorian style house just south of Downtown Columbus. "Diversity" is unique in that it is owned by a transgender woman and has a truly unique clientele.

Saturday night featured a packed house, made up by gay men, lesbian women, straight couples mixed in with the occasional transgender woman or even a cross dresser or two.

As Liz partook of several of their fabulous martini's, I was able to sip my beer and Jagermeister and survey the room to see who may have been surveying me.

It was fun! I had my usual visual contact with a butch lesbian, all the way to a gay guy who was doing his best not to be too noticeable looking at me. I didn't try to hide any of my narcissistic entertainment from Liz, who finally said "You have arrived." I said yes, Compliments of Uber and a lot of HRT :).

Finally, I wore my fuzzy green sweater and leggings for the evening, which turned out to be unseasonably cool. Jagermeister though, is custom made to warm you up as it originated as a German hunting drink. I first made it a friend when I was in the Army in Germany. 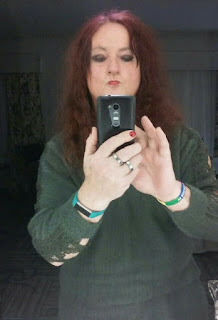 I am riposting a selfie picture I took in the hotel after the trip back. A good time was had by all!

Also, I would be remiss in not writing about our stop for a famous "Thurman's" Hamburger before we went to Diversity. What is amazing to me, is they remember us year after year and we normally end up with the same server. We did well this year, the wait time was only about 45 minutes.

It's time to wrap this post up before I become accused of working for the Columbus Chamber of Commerce!