We received several comments concerning Kristin Beck's run for office in Maryland. One is from our resident Cyrsti's  Condo MODERATE Republican Pat who wrote: "Regardless of your reason for supporting Kristin Beck keep in mind that her positions of the major issues are rock solid and supportable. Also keep in mind that Steny Hoyer has had a strangle hold on that seat for over 3 decades and all he has done is spend and push a socialist agenda. Lets support Kristin and lets hope she can beat Hoyer and finally bring some sense of freedom to the long suffering people of that district.
Pat

And: (from Mandy Sherman) : Unfortunately I can't vote for her because I don't live in her Congressional District. But I certainly wish her all the best and hope that she succeeds beyond her wildest dreams! We need some good Congressional representation...
Go Kristin!Hugs,Mandy 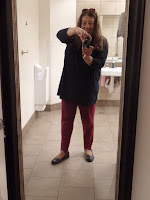 Thanks to both of you and obviously I don't live close enough to Kristin's district to help (except sending a few shekels her way.) Hopefully you can too!  https://www.gofundme.com/beck4congress

Pat, you will be happy to know that for once we agree! Politicians (all of them) should have term limits. For all the blather we hear out of Washington, none of them can seem to work together to get anything done.

Finally, I have two thoughts. I know you are thinking only two??

Who would you rather have speaking at all for the rest of the transgender world, goof ball Jenner or Kristin? (Rumors are already swirling of a possible cancellation of "I am Cait,"

And at what point does Kristin get tired (probably already is) of having the trans and Navy Seal tags slapped on her?

Of course I can't say. I only know it's comforting to have her (Kristin) as an example rather than you know who.
at March 29, 2016