You ARE Gay Dammit! 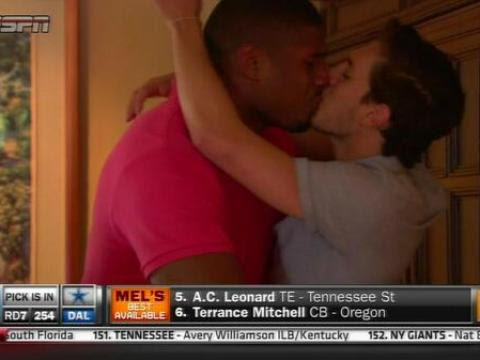 Just when you thought it was OK to come out of the closet and be the NFL's first openly gay player (if he makes the team) Michael Sam was shown smooching his boyfriend after he was drafted. (Left) Of course many are in shock now over the public display of affection but if you ask anyone who has watched the draft closely over recent years-it certainly has looked on occasion that NFL Commissioner Goodell was leaning in for a smootch from NFL players on more than one occasion! So Sam's smootch was not the NFL's first man on man kiss!  Goodell had him beat years ago!

Speaking of the "G" word, if you recall me writing about the wife and daughter of the guy who mis-pronoun-ed me last night, the daughter made sure she didn't make a mistake with me.  When her and her Mom were having the conversation with me about being a transgender woman, Mom said something about me being gay.  Of course I said, I'm transgender not gay.  I had to love the daughter when she said: you (me) are here with two women, your partner is a woman and you identify as a woman-you are GAY!

I said you are right!