It's no big secret or revelation the genders operate on a vastly different playing level when power is involved. Men migrate to teams and alpha males, women towards cliques and a passive aggressive life. Each are very effective in their own ways but often cause serious problems between the binary genders. As far as we transgender folks go of course, we have a whole different set of "power settings". 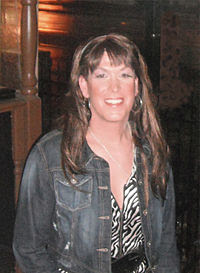 Most of us are very familiar with the male power structure and "put up the good fight".  We went the "macho" route as we struggled to find our gender identity.  The best example is former Navy Seal transsexual woman  Kristen Beck (right) who really pursued a macho profession. (A reason so many service members are transgender)  I played the game well too.  I was a defensive end in football, served my time in the Army and generally was regarded as a macho guy. The problem was though I enjoyed interaction with women more than men and felt more natural. As with other things in my life, it took me years and a ton of thought to have ideas why.

Amazingly to me, I came up with a whole new consideration of my gender social preferences after I wrote the "Problem" post here in Cyrsti's Condo.


If you identify as a cross dresser, transgender or transsexual, chances are you have always been more comfortable with women rather than men also.  I know there are many reasons we do but I began to wonder if gender power issues played a role?  We must feel more comfortable away from the macho lifestyle. I'm was naive though and found the feminine power set up was not the "peaches and cream" style most men think it is and acceptance wasn't an automatic just because I tossed on a wig and dress.

When I actually started to transition, women put me in a special category of sorts which fit my transgender status.  I was neither a genetic woman or a genetic man.  As such it took awhile to be included to the fullest but when I was, I learned quickly the women's passive aggressive power structure to it's fullest. But I can't tell you I have learned to react as a woman.  Relearning a basic male power system has not been an easy process and before all of this, I believed I liked the girls sandbox because they only talked about neat things such as clothes, makeup and family. Plus they were so nice! Ha!

The important part is I'm flourishing in the feminine system and I love the process. I find the passive aggressive nature is an art form. But more and more, if I have to play, somehow I know I was born to do it. Just don't look for me to do it directly- or to your face.  You are just going to have to figure it out on your own- later.

Fortunately, no one was mean to me at the party and I didn't have to play any power games. I just did my nails before I went and was ready!
Email Post
Labels: cross dresser cyrsti's condo Kristen Beck transgender transitioning male to female transsexual