Hammering Away at Gender Norms 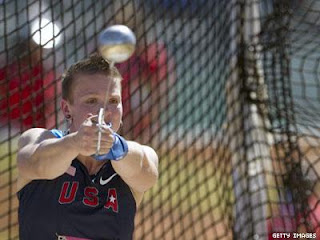 You have probably seen this story and grasped it's transgender scope:
"Keelin Godsey may not have made it to the 2012 Olympics, but the 28-year-old has already made history as the first out transgender athlete to seriously compete for an Olympic berth. Yesterday Godsey competed in the Olympic trials in the women's hammer throw competition, finishing in fifth place but setting a personal best record of 231 feet 3 inches.
Godsey, who came out as a transgender man in 2005, had previously, according to the The New York Times, assumed this Olympic cycle would be the end of his career and that after it he'd begin the medical transition process — a move that would disqualify him from competing in the women's category in the future."
Read more here.
Email Post
Labels: ftm transsexuals Keelin Godsey New York Times SRS trans men transgender transsexual