Ephemeral recently ran a post featuring famous cross dressers.
The post featured one of the all time popular female impersonators and dare I say actresses of his era Julian Eltinge. 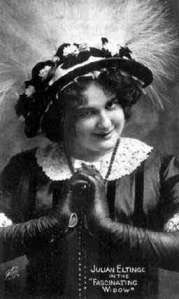 Here's an excerpt:
"All but forgotten today, Julian Eltinge was one of the highest paid actors in the early 1900s.

His shtick: He played all his roles in drag.
But unlike most drag queens, who present a caricature of a woman, Eltinge was a “gender illusionist” pretending, with a wink, to actually be a woman." and of course you can go here for more!