Back in the Saddle...

Well almost that is. I have actually had an active week for a change, even though some of it has been done virtually.
Monday, I had a therapist appointment  by phone. I am so fortunate in that my moods have been stable for awhile now, so the session only went about half the scheduled hour. Hopefully I gave up the rest of my time to a veteran who needed the time worse than I.
Tuesday was what I call "vampire day". I actually had to travel up to Dayton, Ohio to have my blood labs taken to see if I needed to have a pint taken if I had too much iron in my blood. Also, it was my second try to find out what my hormone levels were. The last time they were taken, the labs disappeared in the system. In a day or so, I will be able to check myself on my veterans health on line site. I am still three months away from my next endocrinologist visit so hopefully all will be fine as it was with my iron. This time I didn't have to have any blood taken.
Tuesday also happened to be the day for the "question of the week." The Dayton VA hospital I go to is now cordoned off so they can control who comes and goes. When I arrived at the guard station, the woman asked me if I was there for an appointment. I so wanted to say, no, this place is so exciting I just come to hang out here. But I didn't.
Thursday was my virtual meeting with the Rainbow Elder Alliance up in Dayton. The group was screening me to see if they wanted me on their board of directors. My goal is to get to a point where I can speak to elderly housing groups concerning treatment of transgender and LGB persons they treat. If I can get to a point where I can help at least one other person, the whole effort can be worthwhile.
One other surprise I took from the virtual meeting was how much the other board members didn't know about transgender people. In fact, one of the women said just that. I told them, there haven't been many questions I haven't been asked over the years, so fire away!
Thursday was also the day for our trip to the market. I don't know how you feel about wearing a mask in public. I feel if I want to protect someone else, I should have the right and I expect others to respect me too by wearing a mask. Yes it is uncomfortable and it makes it hard for me to breathe with my breathing problems but I do it and so should they. It's a good thing some of them couldn't hear what I was calling them, under my mask. So much for my rant of the week.
By Thursday night I was "socialized" out and decided not to attend the first virtual social of the cross dresser-transgender group I am a part of. As snarky as I was feeling, it was probably a good move. As I am back to whatever "passes" for normal for me now!
at May 22, 2020 No comments:

"There is no medically valid reason to exclude transgender individuals from military service. " 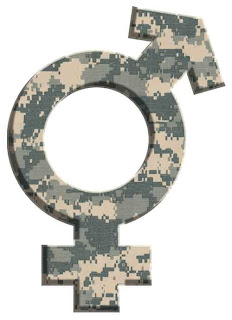 The largest doctors’ association in the country is lambasting Defense Secretary James Mattis for signing off on a ban on transgender people serving in the military.The CEO of the American Medical Association (AMA), James Madara, sent Mattis a letter this week — published by Politico — decrying the conclusion that a “history or diagnosis of gender dysphoria” is disqualifying for military service. “We believe there is no medically valid reason — including a diagnosis of gender dysphoria — to exclude transgender individuals from military service,” Madara writes in the letter. He goes onto to say that the memo to President Trump laying out the justifications for the ban “mischaracterized and rejected the wide body of peer-reviewed research on the effectiveness of transgender medical care.” That breadth of research led the AMA to approve a resolution in 2015 supporting trans military service. "