From theFrisky: " The first look at Eddie Remayne (left) as trans artist and model Lili Elbe, whom he will be portraying in the upcoming film The Danish Girl. Elbe was one of the first identifiable recipients of a gender corrective surgery, in Germany in 1930. Tragically, Elbe died in 1931 at the age of 48 when an attempted uterus transplant went wrong.

In life, however, Elbe was a vibrant woman living the life of a libertine artist in early 1900s France. Which, I think, is what we all wish we were doing right now.
Here she is in real life, wearing a jaunty hat! "
OK, here is my question I assume most of us  are all waiting for, were there no transgender actors/actresses capable of doing this role?

The "Out" Door Opens Again!

THE GUERRILLA ANGEL REPORT — First it was musician Laura Jane Grace in the Spring, followed by film director Lana Wachowski’s debut this Summer. Now Australia’s Lindsay Walker, an artist who has previously drawn a number of covers for The Phantom comic book series, has recently made her transition to female official. While Walker may not be as famous as Grace and Wachowski, the comic book phenomena is nothing to sneeze at. Like her trans peers elsewhere in the art world, Walker becomes a role model for trans people following comic books in general and The Phantom in particular. In addition, the knowledge of a trans artist in the business helps “normalizes” the presence of trans people. Thumbs up to Lindsay Walker, another trans role model. 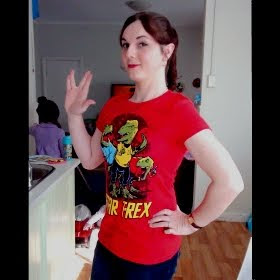