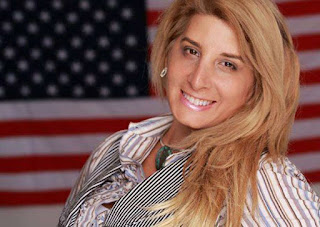 From Connecticut:  Jacey Wyatt from Branford, who grew up as John Christian Pascarella before undergoing gender reassignment surgery in 2003, is running for governor as a Democrat.

The post was a bit confusing to me as Wyatt said she was born with “both sexes,” but has always identified as a woman.

“I grew up with Barbies,” Wyatt said. “I didn’t go to the bathroom at the school. I went home.”
Wyatt said she was fortunate to have the money and support to undergo gender reassignment surgery at the University of Connecticut, including breast augmentation and hormone therapy.
“I’m a legal female,” Wyatt said. “I will never, ever, ever have a situation that I can’t go to the bathroom in North Carolina. (But) there’s somebody that maybe can’t afford what I had done.

From the ThinkProgress site:

"Despite the repeal of Don’t Ask, Don’t Tell, the military still does not allow people who are transgender to serve.

Still, many people only transition after they’ve completed their service, creating complications for their continued receipt of benefits. Now, the Pentagon has recognized its first gender change for a military veteran and established a process — albeit a bit burdensome one — for future trans vets to do the same. Blogger and activist Autumn Sandeen was informed earlier this month that the Defense Enrollment Eligibility Reporting System (DEERS) has been updated to show her gender as female. Department of Defense spokesman Lt. Cmdr. Nathan Christensen provided the following statement to BuzzFeed: For the last several years, the Department has made requested changes to gender in the Defense Eligibility Enrollment Reporting System (DEERS) for military retirees.

A gender change in DEERS may be accomplished by the retiree presenting the following documents: - A letter from the doctor who performed the surgery, documenting completion of a gender reassignment surgery - A court order, legally changing the gender in accordance with applicable state law - An original birth certificate - A document, reflecting the sponsor’s name and if applicable, gender following completion of the gender reassignment procedure for a spouse The Department will not change a gender in DEERS if it results in a loss of benefits to the spouse of the retired member due to the Defense of Marriage Act (DOMA). The last point is noteworthy, in that the military is committed to making sure retirees receive spousal benefits without conflicting with the limitations of DOMA."

Of course there is much more to this process of interest to all of us transgender veterans.here to read more.
Go
at May 18, 2013 No comments:

Get More: Watch Reality TV, Video and Movies, Logo TV
Project Runway Season 8 finalist, Andy South, sat down for an interview exclusively with NewNowNext to talk about the new flagship store he’s opening in Honolulu’s Chinatown and opened up about her gender transition. Andy on Project Runway // Photo Courtesy Lifetime Turns the uber talented designer and fan favorite from the season that featured the likes of Mondo Guerro, Michael Costello, and Gretchen Jones (the eventual winner) started her gender reassignment therapy before going on the Lifetime show. But when shooting started, she set the hormone pills aside. Now that she’s home in Honolulu, successful with her budding designer career (her label — Andy South — is carried by Nieman Marcus), the 25 year-old, beloved Hawaii native has started living her life as Nong Ariyaphon Southiphong.
at September 21, 2012 No comments: