This  happens to me very rarely, in fact about once every  two years and a half. Yesterday I received a friend request on Facebook from a person I ultimately decided I knew from my old male cross dressing days.  Recently I have been accepting requests from those acquaintances I have met or people who live close to me.  This person actually lives in a town I used to run a restaurant in just before I retired. So I accepted.

Almost immediately she messaged me about how much I had changed for the better. Which of course was nice. From there we exchanged niceties and remembrances concerning the places we happened to hang out  together with mutual friends. Ironically one of the friends was one I was thinking of fondly a couple days ago. He ran a neighborhood tavern I used to go to quite frequently. From his clientele which ranged into a few gay and lesbian types, I often wondered how I would have been accepted as my authentic self. Sadly I was never able to find out because I never had enough courage to try and he ended up passing away shortly after all of that. I fondly remember him as a kind man who accepted most all types in his tavern as long as they weren't trouble makers.

It only makes three people (all cis women) who I "imprinted" as my false male self now who have tracked me down over the past decade. On occasion it is fun to ponder the "what if's". What if I had thrown caution to the wind and transitioned? Even though the three women who accept me now  gladly do it, would they have done it then when the world was different as far as transgender women and men were concerned. Actually, even back in those days, I was exploring the feminine world in my own way to answer my questions about transitioning. I have written before how I had very few male friends to start with and they all died. 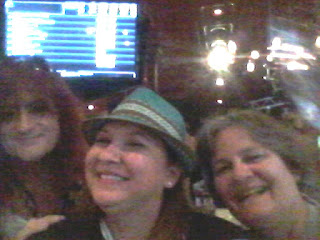 Even though I still knew several cis women, more importantly I was forming new friend bonds with other women so my transition was made so much easier. The photo is me with Nikki and Kim to the right. They quite possibly helped me to save my life and made my Mtf gender transition so much easier.

Along with Kathy and Mim who invited to my first girls night outs, my gender confidence soared.

All of them including my partner Liz of course helped me to pry the transgender closet door open and allow me to finally escape.

So. it is always a surprise when I happen upon a person who knew the "before me:" Almost to a person, no one ever guessed my "secret." Which only meant I was very successful at hiding my authentic feminine self.

The biggest surprise was on me when I discovered how natural it all felt after I transitioned.