A Night at the Theatre

This will be the final post concerning how Halloween parties paved the way for me to actually come out of the closet and live a fulltime feminine life.

This one goes way back to my post Army days in the mid 1970's and happened in Columbus, Ohio.

When Halloween rolled around that year, Columbus had just restored and reopened the "Ohio Theatre" a very ornate and beautiful structure complete with the original restored theatre organ. For the event, they decided to present a costumed event complete with a silent horror movie and the organ music .I thought it would be an ideal time to reprise my "costume" I wore at the Army Halloween party I went to.

For the evening I managed to persuade my future first wife and two other friends to attend with me. The first mistake I discovered I made was when we had to park approximately two blocks away. Up to that time in my life, I had never attempted to walk that far in high heels before and I felt it! Other than feeling the fall chill on my exposed legs, the only other real impact I felt was how much attention my outfit did not cause. I guess with all the other unique and wonderful costumes, a guy in a mini dress didn't cause much attention.

However, none of that mattered as we found our seats for the show. The theatre was magnificent. Especially for a person such as me who is really into history and restoration. I do remember trying my best to enjoy being dressed as my authentic self.  After all, it was very close to the first time I was able to actually go out in public as a woman.

Looking back at all of it was, once the thrill wore off, I was coming to understand how natural I felt 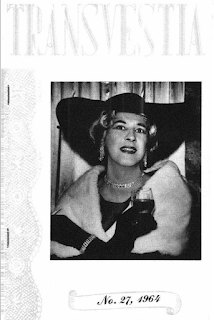 and how would I ever make it an entire year before I could attempt going out again. Finally the realization slowly came to me indeed I couldn't make it and would have to find other ways to express myself. About this time was when I started to research Virginia Prince and subscribed to the cross dressing Transvestia magazine. Wow! There were others like me after all!

Bottom line was, once the door to my gender closet was opened, it could never be closed again. As I have written sever times, I felt too natural as my feminine self to go back.

A night at the theatre proved to be only the beginning as I was able to enjoy watching the show around me as the woman I was destined to become.