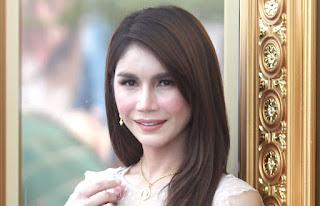 Thailand is considering whether to deport a transgender businesswoman who was convicted this month of illegal entry and is wanted in Malaysia for insulting Islam, a case that has put a spotlight on Malaysia's approach to gender identity.

Cosmetics company owner Nur Sajat, (above) as she prefers to be known, fled from Malaysia this year. Thai police confirmed that Sajat was arrested this month and was found guilty by a court of illegal entry and subsequently released on bail.

In Malaysia, she faces up to three years in jail and or a fine for dressing as a woman at a religious event in 2018, which she pleaded not guilty to, according to news reports.