Yesterday was therapy day. I have mentioned many times here in Cyrsti's Condo how long I have been with my VA therapist. She is my original therapist with the VA who helped me with my hormone replacement therapy program as well as the paper work to get my legal name change rolling. In other words, a long time.

During most sessions she asks me about the blog and this session our discussion here on "Confidence" caught her attention. Yesterday, it really did when I quoted the conversation here by saying "Confidence is our one greatest accessory." She was so impressed, she wrote it down.

Most of the time I forget I have to backtrack with her and explain what I am saying. An example would be the process we transgender women and men go through to live a new life as our authentic selves. According to Connie, it's a wall:

"  I remember much discussion, here on CC, about sitting on the wall (straddling the fence). That may be one degree past being up against the wall, but it's where many of us end up for far too long. Once I had built up enough nerve to make the jump to the other side, I found it to be a soft landing - and I have walked confidently on this side of the wall ever since."

Thanks for the comment! I always referred to my "wall" as a slippery slope. The more I experimented living in a feminine world, sure it was scary but it felt so natural. Finally I made the decision to permanently put my male persona in the closet and live 24/7 as a transgender woman.

Perhaps the teacher will learn just a little more to help the next novice trans person she encounters. I keep telling my therapist to consider just the smallest gender aspect of her life she takes for granted and reverse it. Another example would be when she wakes up in the morning. She has the gender privilege of knowing she is a woman. Most of us knew it too but had to really work to express it.

It's really wonderful when the teacher learns too.

This picture taken after my first trip to a real woman's  hair solon. A birthday gift from my daughter. from 2015. 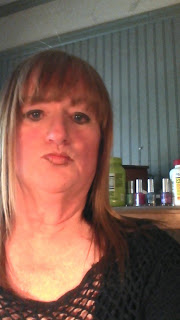