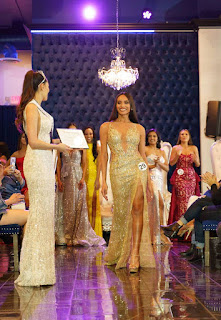 For the first time in the pageant's history, the title of Miss Nevada  has been won by a transgender woman.

Kataluna Enriquez was crowned the winner Sunday in Las Vegas. The 27 year old won the Miss Silver State pageant in March. It was the preliminary for this pageant.

If she wins the completion in  November, she joins Spain's Angela Ponce as the seconder transgender woman ever to compete in the Miss Universe pageant.