I Wonder Where she Is?

In fact, the only cis woman of significance in my life who tried to parlay my cross dressing into anything remotely against me was my finance way back in my college days.  Instead of keeping my gender desires in the closet, I couldn't take it any longer and came out to her. After intense discussions she finally agreed to go with me to a motel room and help me with my transition. It worked for me at least and I marveled at the novice cross dresser who was looking back at me in the mirror. Of course, even way back then, I knew the buzz wouldn't last. I could take what she showed me, apply it to myself and learn more about my femininity.

All went fairly well, until it was time to graduate college and the draft board was eagerly awaiting my induction into the military. It was at this time she found another boyfriend and laid down the line to me. Either tell the Army I was gay and try to dodge the draft or we were done.

I knew that would never work and we broke up not long before I was scheduled to report to Ft. Knox in Kentucky for winter time Army basic training. The more I tried to forget her, the more bitter I became. As I thought about her, the more I wanted to return one day in the future in a new car looking beautiful in a pretty dress.

That day never came. I moved away and became involved with other women with various acceptance of my gender dysphoria. I always thought my first wife never cared that much and didn't  'understand the difference between being a cross dresser or transvestite back then as compared to being a transgender woman which was becoming well known.

My second wife understood the difference well and never accepted it until the day she died and years later I came full circle with my partner Liz who fully accepted me as my feminine self. Even to the point of being instrumental in me fully coming out of  the closet  and transitioning into a full time transgender woman.

As far as my fiancé goes, if she transitioned into what her Mom became later in life, I may have gotten my revenge anyhow.

Picture from New Years Eve (pre-covid) with Liz and I. 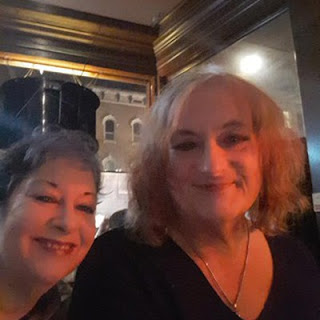