Back in my "Howling" Days

I still love Paula's comment about how many of us novice transgender women go through an early phase when we could be referred to as "Howlers." Referring of course to fashion mistakes which usually are related to trying to dress as a teen aged girl when we are much older. Connie then added "Growlers" (seen below) to the post in a comment. 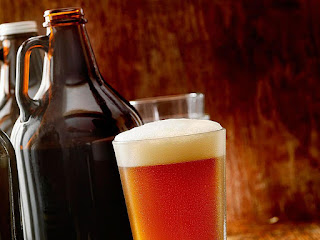 Back in the day, I was guilty of abusing both. I cringe now when I think back of a few of the ridiculous outfits I managed to put together and then go out in public. Then, to add insult to injury, I would try to find "liquid courage" by drinking mega amounts of beer along with the occasional shot.

Both of which I was recently reminded of when an old acquaintance of mine's birthday showed up on Facebook. What happened was one of the venues I was going to I thought was safely out of my home town enough to hide my gender secret. In fact, it was a big sports bar and one of the first places I went to and began to establish my own feminine persona.

I increasingly felt secure in going there until one day when I walked in, sat down and was immediately surprised by the person I knew so well. It turns out she was training to be a bartender there. For awhile she played it cool and never said anything so I wondered if she even knew, until one day she said "Don't I know you?" Of course by then, it was too late to try to lie my way out of it and I said yes.

Over the duration of time she worked there, I don't believe she told any of the people who happened to overlap our circle of friends about our "secret." From there, life went on and she graduated college, got married and moved away.

My only regret is she had to witness the "Howler and Growler" period of my life as I started to explore living as a transgender woman.

She lives many miles away now and it's doubtful I will ever see her again anyhow but it's just another part of my past which haunts me.