As Cyrsti's Condo is firmly entrenched in it's tenth year of existence and with over 6,000 posts, finding new topics to explore becomes increasingly difficult. It's during this time I aggressively seek outside sources for ideas.

Recently, I found this quote which describes many of the early experiences I went through as I explored the feminine world as a cross dresser earlier in life. This was before I transitioned into a fully functioning transgender woman.

Every once in a while though, I encounter the occasional novice transgender person who thinks I magically arrived where I am now with very few problems. All of that couldn't be farther from the truth.

Like so many others who encountered gender dysphoria during their life, I seemingly had to go through so many self destructive times which I could write a whole new post about. In other words, I felt the fear and did it anyway...the wrong way.

I was fortunate though in that I was able to grasp a couple of things which helped to to get by and even succeed.

The first of which was being able to begin HRT (hormone replacement therapy) which at my age wasn't a given. I had to have the good health to do it. Essentially what happened to me outside of the obvious was the feminine pronouns took the male edge off of me. I became easier to get along with.

The second of which was when I encountered a series of cis women who welcomed me into their circle and I was able to learn more completely how to exist in a feminine world.

Overall, this phrase became my mantra and I have been able to succeed. I never take it for granted. 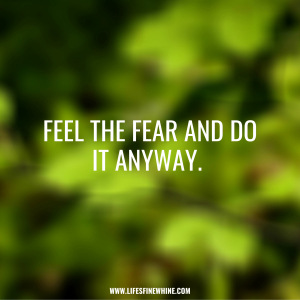