All of a sudden more "Sports and the Transgender Girl" has emerged. The first of which comes from across the pond and involves Charlie Martin (below) a veteran trans endurance racer from the United Kingdom. She uses her platform to promote LGBTQ issues as well as someday racing in the 24 Hours of Le Mans. 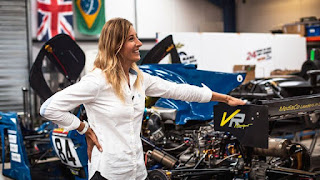 The second part of the post regards a comment from Connie and her experience with her wife and sports:

"My wife has become quite the sports fan over the years. We spend more (quality) time watching sports than most anything else. Years ago, when she had had enough of my not-so-secret girlish ways, she left to stay with her sister for the weekend. Although she knew what I was doing, she had never seen me dressed, and it had gotten to the point where I had to show her my real self. It was a Sunday afternoon in December, and there was an NFL playoff game on TV when she came home. I emerged from the basement, where I had been spending so much time away from her in order to "be myself" - by myself. This was a big deal, I was thinking to myself, but my wife seemed more interested in the game than she was in the "pretty-me." We just sat together and watched the game until halftime before we had any real discussion. I also made a pitcher of Margaritas before halftime, and that helped, too! Oh, I might add that, after that day, I could also admit to her that I enjoyed watching figure skating with her, as well. :-)"

My deceased wife was quite the sports fan. Just not with me being my authentic self. Liz is also quite the sports fan. Of course she also accepts my true self. It all makes life so much easier and fun. I always remember going to a woman's roller derby event with three lesbians drinking dollar beers as one of my highlights in sports.