Very rarely do we learn the story behind any of the pictures we see on line. In fact, I stopped even looking at one site I used to be active on because I was beginning to doubt more than a few of the "glamorous" transgender women or cross dressers weren't actually cis women in reality. I tried to tell myself too, pictures can be photo shopped and are only moments in time. So much more goes into presenting as a woman than is represented in a picture.
But, the neat thing is about pictures is, they often are all we have to pass along idea's and remember where we were at a time and place, Take this picture of me for example. First of all it was taken a couple of years ago when I had longer and a darker/auburn hair. Secondly, it was taken in one of those mirrors with special soft surround light, All of which contributed to making me look different than I normally did. Finally, it was taken during one of those rare moments in time i had my finger nails professionally done. All in all, the picture is still me...with an asterisk. I have to add though, nothing of what I did would be different than many cis women would do to enhance their appearance in a picture.
In a recent Cyrsti's Condo post, I used one of a couple of Connie's pictures I happen to have on file to accent one of her comments. Here, is her return comment:
"So, the pic you chose was taken about eleven years ago. It was that very day that I came out, in person, to a woman friend. It was the first time anyone from my past life had met me as Connie (other than my wife). My friend had no idea of what she was about to see, when she stopped by my house on her way home from work. It went well, but I decided, afterward, that I would never surprise another like that again. I realized that it wasn't really fair to the other person, as it can put them on the spot. Then, it took another three years to come out to most everyone else - except most of my in-laws (about 100 of them, if you count cousins and such). The word had spread, though, so it was just a matter of making a gender reveal, of sorts, at a (very) large family gathering, in 2014. I don't remember exactly when we first met on that (pastel color) site, but, with all the back-and-forth yapping we did, I can't believe we waited so long to finally take action. I look at that pic of myself, and I see that I was beyond ready to transition at that time. I may not be as young, and less wrinkly and saggy as I was, but I'm still every bit the smartass. Sarcasm is not limited by gender! ;-) BTW, in my story, I was both of the people in the Thunderbird. I have had dreams, since my pre-teens, of being behind the wheel of a turquoise '57 T-Bird. I'm in a cute halter top that is tied at the midriff to show my skinny waist, my natural long blonde hair covered by a silk scarf, with big sunglasses and red lipstick on. Oh, and I can't forget the perfectly manicured and painted fingernails, as my lovely hands are resting on top of the steering wheel. Too late now; I can't get there from here, either."
Nice! Thanks for the memory!  Also as many of you who read the post comments know, Marcia also remembers our (witty???) give and take on the website I mentioned (not by name) because I believe it still exists. It's a small world in the trans community if we like it or not. 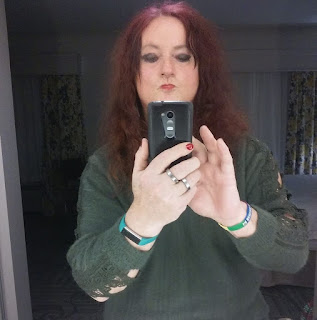