Do women smile more than men? And if they do, what does it mean to you?

Obviously, if you are trying to insert yourself into a feminine world, you should learn to smile more. Think about it, once you have perfectly thought of every feminine detail concerning your outfit, makeup and hair...don't forget to smile. It's the perfect accessory.

However, as with anything else which has to do with the human gender, this idea gets very complex too. I initially thought of the idea for this post after seeing a handwritten sign in my local coffee shop which said something like women smile eight times more than men. I researched and couldn't find that number but I did find an interesting article to share with all of you. It's from Slate and here is an excerpt:


"Women have to be nice. “Show me a smile” is a staple of street harassment (the ur-creep of the genre being Heath Ledger’s Joker, a lank-haired greaseball leering, “Why so serious?”) And when they are not, when they are merely impassive or thoughtful, they can be held up for mockery and branded as rude. 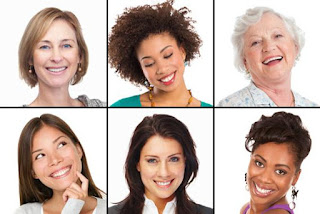 To ask why is to step into the laser grid of unspoken rules governing the arrangement of male and female faces—the gendered ways we police social performance. (If you’re a woman who thinks this sort of policing doesn’t happen in real life, consider whether a friend has ever yanked you from an introspective haze by asking “Are you mad at me?” She probably meant: Why aren’t you smiling?) We’ve tangled up so many notions of gender in our smiles that the presence or absence of a grin has come to imply a distinction between male and female. In one study, babies dressed in green and yellow were paraded before a group of onlookers. When the infants cooed, gurgled and smiled, the observers tagged them as girls; fretters and criers were assumed to be boys. The effect persisted when a different group of participants was presented with images of cheerful or angry adult faces. People readily identified smiling women as female and wrathful men as male, but they took longer and stumbled more often when confronted with furious female countenances or beaming male ones."
For more, follow the link above to Slate and remember, the next time a woman smiles at you when you are out and about in your cross dressed best, perhaps she is doing what comes naturally.
You should too.