It is difficult to encapsulate an eleven day marathon trip across the country to the beautiful state of Colorado but I will try with a few pictures on the Cyrsti's Condo blog. I will also try not to bore you all.

The first picture I found was from Dodge City, Kansas on a very hot day. Before any of you television historians ask...no I didn't see Marshall Dillon or other characters of the old "Gunsmoke"  show. This picture of Liz and I was taken by our tour guide.

This steam engine (as you can probably tell) was way past it's active life. There was a Burger King on the opposite corner which probably is owned by "Miss Kitty's" relation. She was the saloon operator and liberated woman on the television show. 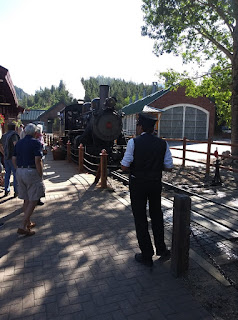 We did get to ride a couple active steam engines on the trip. One of which was on the "Georgetown Loop" between Silver Plume and Georgetown, Colorado.  For you purists, this is actually a narrow gauge oil fired engine.