Are You a Feminist?

One of the questions which basically caught me by surprise during my interview during the Trans Ohio Symposium by J.M. Ellison, was I a feminist.

I said, of course I was and had been one years before I even transitioned fully.

During my years in the restaurant business, I worked mainly around women and their success was my success. Often, I learned the hard way what being a woman was all about, through their eyes. I saw how difficult it was for them to gain and keep the respect of macho dominated kitchen crews and often, how much harder it was for them to work with groups of women.

So yes, I became a firm feminist many years ago. So, it didn't come as a total surprise to me what happened to me when I began to transition to a full time feminine life. All of a sudden, I became a second class citizen when I was talking to a group of men. Also, I had to wait behind guys to get served and wasn't even given credit on how to get to my own house by a tow driver one time.

Amazingly enough, my learning experience carried all the way over to when I started what I called my "lesbian phase."  I ended up having many good experiences along with many which weren't so good. Along the way though, I sensed many of the women I came in contact with on a positive level were reacting to me because I presented as a "lipstick lesbian" with the slightest bit of maleness for balance. Of course most women don't carry the same sexual deep paranoia's as men do.

At any rate, I ended up adding another level of feminine understanding.

I was on a sensory overdrive to prove to my self I could prove my wife wrong when she said I didn't have any idea about what being a woman was all about.

On another level, what I don't understand is why transgender women have such a hard time being accepted by "Terf's"
(Trans Exclusionary Radical Feminists). 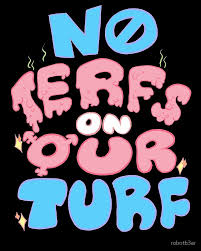 Very simply, a trans woman has had a different path to becoming a woman. Plus, let's not forget being born female does not make you a woman. Society does.

It would seem to me, in a time where women's rights continue to come under attack, any help would be welcome to change society. Especially from a transgender woman who has been on both sides of the gender fences.
at May 03, 2019