Actually I like the word "presenting" better than "passing" when it comes to describing one's feminine appearance. 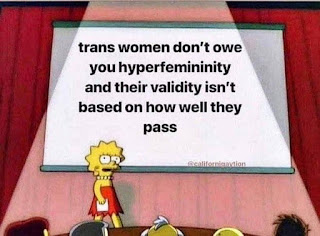 Also, the term is way over used anyhow but is it a natural phenomena or not? After all, the world operates to a large extent on appearance. I remember going to a very small rural school growing up with basically the same kids all the way from first to ninth grade. The most attractive kids basically formed a clique which lasted all the way.

Unfortunately, we transgender women still have a tendency to over rate ourselves when it comes to appearance. Instead we need to rely on our inner confidence to show the world who we really are. Always remember, the majority of cis women in the world don't have the benefit of being physically beautiful either but do the best they can with what they inherited.

Equally as bad is when we all get set up for failure by the cross dressers and/or novice trans women who often think dressing trashy is sexy and never present well.

The bottom line though is well represented by the quote above.  Thanks to Jill for sending it along!