Perhaps you remember the post here in Cyrsti's Condo concerning the transgender boy here in the Cincinnati area who was removed from his parents home. Staying would have resulted in suicide. 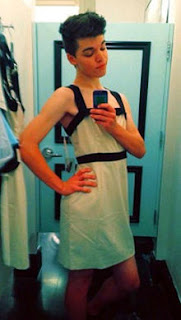 The father, kept telling him to go ahead and commit suicide while the mother pushed long and hard for 'Christian Conversion Therapy'. The trans kid was/or would be subjected to being read bible verses six hours a day.

What is happening now is in the court's hands. His grandparents have stepped up and volunteered to take charge and help the trans boy. In other words, to basically save his life.

If you recall too, the idea of teen transgender suicide is all too real here in the Cincinnati area. A couple years ago, Leelah Alcorn (right) committed suicide by stepping in front of a semi truck near her home on an interstate highway.

Thanks to intervention this time, hopefully such a tragedy won't happen again!
at January 28, 2018