Don't I Know You? 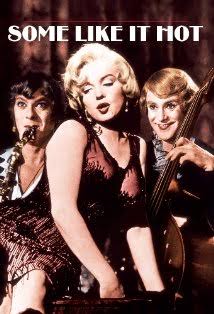 Last weekend, one of the classic movie channels showed the movie Some Like it Hot with Tony Curtis, Jack Lemmons and Marilyn Monroe. The 1959 classic is based on Lemmons and Curtis trying to elude the Chicago Mob in drag after witnessing a hit.

Throughout the movie mostly Curtis who appeared more predominately as a man and woman was asked "Don't I know you?"

Which brings me to a point from my last post "Oh No She Didn't" when I mentioned being recognized when I was cross dressed before I went 24/7.

Taking the subject a bit further was Mandy Sherman:

Oh, but as we know, they CAN and WILL recognize you! IMHO the only way to"possibly" avoid it is to NOT wear your hair the normal way when dressed. Mine "is what it is." All the time. Dressed or androgynous. And I'm recognizable. I don't care... A couple of years ago, I went into a restaurant on the other side of the Chesapeake, about 60 miles from home (in a congested shopping area), fully femme. A safe thing to do, right? Ummm...not so much. Our current next door neighbors were having dinner there. Oops. And I didn't see them.I'm still not sure if they got an eyefull...but they could have seen everything! They didn't say hello till AFTER I was seated, and they both were on the way to the potty before leaving. It's hard to hide earrings, painted nails and a skirt when you're trapped at a table in a restaurant.Those same folks invited my wife and I to a party at their house later in the season. I was nervous, but nothing was said...so I'll never know for sure what they saw. Yes, they've seen me running around the house in one of my house-dresses, so they DO know...The makeover I sat for a couple years ago proved that the only way to possibly "not" be recognized is a drastic change in hairstyle. I have long, dark, wavy and somewhat flyaway hair with dishwater blondish ends, and the wig the artist put on me was a dark chin length bob, rather short and with uniform color. (You can see it in my posts "The Marvelous Weekend", parts 1 through 3 from August of 2014) With that wig, even my own mother can't recognize me in a picture! Yes, Mom knows I dress and isn't overly fond of it, but with dementia she doesn't remember (though she normally does recognize me in pictures with my regular girl clothes...) Fortunately, the memory disappears before I hit the door on the way out.Hang in there, girlfriend!Mandy

Thanks Mandy! I have provided a link to her blog above :) As far as "hanging" goes, these days I try to not let the noose get too tight!
at March 03, 2017

Email ThisBlogThis!Share to TwitterShare to FacebookShare to Pinterest
Labels: androgynous, cross dressed, drag, LGBT, Some Like It Hot, transgender