From the Washington Blade: Defense Secretary Ashton Carter has invoked the ire an LGBT think-tank for saying the implementation of openly transgender military service is “complicated.” The Pentagon chief made the remarks last week at the Air Force Academy in Colorado when questioned by a cadet on the best way to help people adjust to the idea of transgender people in the armed forces. “This is a complicated issue, and I think it has a lot of ramifications that are very practical ones,” Carter said. Months after a launching a review of the ban prohibiting trans people from serving in the armed forces, Carter said the principle of enabling trans military service is “sort of settled.”

“What matters is people’s ability to contribute to our military,” Carter said. “That’s what matters. The only barriers we should ever erect to the principle are ones in which there are practical issues that we can’t work through.” 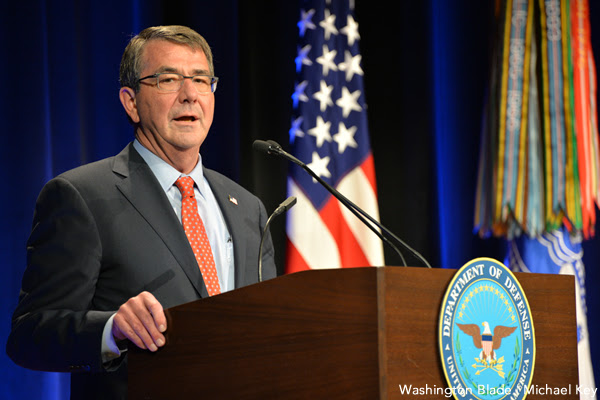 Expressing confidence the issues would be resolved, Carter concluded, “It’s the quality and readiness of the force that matters. That’s the goal. We keep that in front of us.”
The repeal of “Don’t Ask, Don’t Tell” enabled openly lesbian, gay and bisexual people to serve in the U.S. armed forces, but transgender people are still barred from open service as a result of medical regulation instituted in the 1980s.
- See more here.

As predicted, none of this was unexpected from the Pentagon. Washington after all is known for it's incompetent bureaucrats (Carter) who collect a paycheck and move on.

I have screamed it before and I will again the greatest hypocrisy in this country is with  holding basic freedoms from the transgender military members who are on the front lines fighting for them.
at May 17, 2016