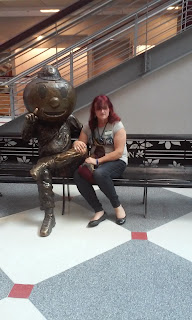 Ideally, the core reason for attending the Trans Ohio Symposium for Liz and I was the hour set aside for my workshop on the transgender senior citizen.  What really happened (again) is I learned as much (or more) than I brought to the Symposium.  Plus, I got to meet a few very fascinating peeps.

My workshop this year was interesting in it's demographics which not unsurprisingly fit the whole group. Fully half of my group were allies but adding in a dash of spice was a person  who had transitioned years ago on the job, worked as a drag queen and contracted HIV. We also had a person who by her own admission, did the life balancing act living as a man, father and husband - and a woman when she could.

The allies? They were there because they had a niece who is trans and a brother who has written a book on having a transgender child.(Who attended.)

As promised, my agenda for the group was a blank piece of paper and I only ended up talking about myself for 15 minutes and let them fill the rest. Only jumping in to "facilitate" the discussion to those most qualified to talk on the subject.

This year at least I was pleased about the outcome and extra pleased from the ally input which was to be a theme throughout the weekend. Not one I expected.

So, there you go. The pic above shows The Ohio State Union building behind me and is from day one when Liz and I volunteered to help check everyone in. As I wrote earlier here in Cyrsti's Condo-the side stories from the weekend were classic!