All kinds of positive things are happening in the transgender community-regardless of what Bruce Jenner's upcoming Diane Sawyer interview turns out to be. Here are a couple to look for:  The first from the Windy City Media Group:

( San Francisco ) - At a time when transgender and gender nonconforming people across the U.S. and around the world have achieved unprecedented visibility in popular culture, but continue to suffer extreme violence, harassment, discrimination, and isolation, Independent Lens presents Kumu Hina,

a moving film from Hawaii that offers a bold new perspective on gender diversity and inclusion through cultural empowerment. Directed and produced by Dean Hamer and Joe Wilson, Kumu Hina premieres on Independent Lens Monday, May 4, 2015, 10:00-11:00 PM ET ( check local listings ) as part of Asian American and Pacific Islander Heritage Month programming on PBS.
Kumu Hina is the inspiring story of Hina Wong-Kalu, a transgender native Hawaiian teacher and cultural icon who brings to life Hawaii's traditional embrace of mahu — those who embody both male and female spirit. The film traces Hina's evolution from a timid high school boy to her position as a married woman and cultural director of a school in one of Honolulu's grittier neighborhoods. As she contemplates who should lead the school's all-male hula troupe in their final performance, a surprising candidate presents herself: Ho'onani, a sixth grader who is proud to be seen as a mixture of boy and girl. As Kumu Hina helps Ho'onani to negotiate the mixed reactions of her classmates and her family, the power of culture to instill a sense of pride and acceptance becomes clear.

Then, there is the Entertainment Weekly piece we mentioned in a previous Cyrsti's Condo post. 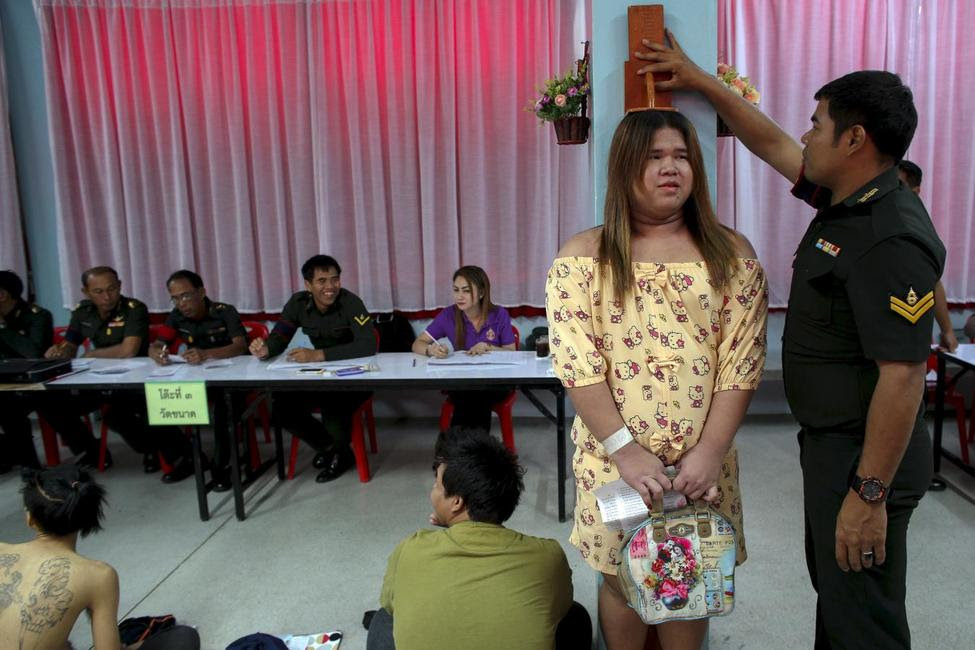 And finally, for this post-there is yet another post concerning issues with the Thailand Army draft (left). Check it out here from Rueters.