Last night, my partner Liz and I went to a small Professional Woman's  Dinner "Meetup".  I have not been excluded from this one like the lesbians have from the "Loki" group here in Cincinnati.  It's an incredible time hearing how these other women approach their professional lives.  Of course each get together such as these have the initial "introductions."  As quickly as my old noggin could think, I thought I am not going to introduce myself as transgender with all the carnival barkers jumping on the trans band wagon.  So, I went with the "Two Spirit" name.

Of course, my introduction confuses many "civilians" more, but it's simpler for me to say very little more and chat later-if anyone cares.

I have found many trans people don't know of, or don't embrace the Two or Dual Spirit ideas at all.
From the U.S version of the Guardian comes a look: This week's guest editor, Antony Hegarty, is a fan of the book The Spirit and the Flesh. He asked its author, Walter L Williams, to write a feature for guardian.co.uk/music on the 'two-spirit' tradition in Native American culture:
Native Americans have often held intersex, androgynous people, feminine males and masculine females in high respect. The most common term to define such persons today is to refer to them as "two-spirit" people, but in the past feminine males were sometimes referred to as "berdache" by early French explorers in North America, who adapted a Persian word "bardaj", meaning an intimate male friend. Because these androgynous males were commonly married to a masculine man, or had sex with men, and the masculine females had feminine women as wives, the term berdache had a clear homosexual connotation. Both the Spanish settlers in Latin America and the English colonists in North America condemned them as "sodomites. 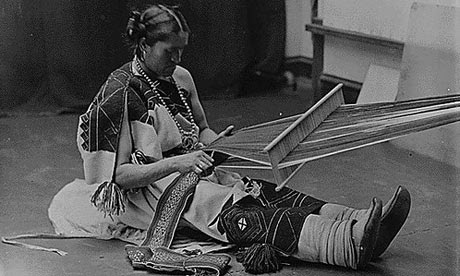 Above, We-Wa, a Zuni two-spirit, weaving US national archives


Rather than emphasising the homosexuality of these persons, however, many Native Americans focused on their spiritual gifts. American Indian traditionalists, even today, tend to see a person's basic character as a reflection of their spirit. Since everything that exists is thought to come from the spirit world, androgynous or transgender persons are seen as doubly blessed, having both the spirit of a man and the spirit of a woman. Thus, they are honoured for having two spirits, and are seen as more spiritually gifted than the typical masculine male or feminine female.

Therefore, many Native American religions, rather than stigmatising such persons, often looked to them as religious leaders and teachers.

In my next post, I will tell you why many transgender elitists won't accept the idea at all.
at February 12, 2015