How Many Words IS a Picture Worth?

I have been meaning to write a post "focusing" on pictures here in Cyrsti's Condo for a minute now. Finally, I'm going to try to make some sense of a complicated concept.

If you are like me, pictures don't really represent what I think I look like.  So, either I try to play with them or just don't put much emphasis on them.  Years ago, I think I could take a better picture than what I really looked like. As an example,  I have used a picture on the left which is actually 10 years old and quite possibly the most commented picture I ever put on line...but...presenting to the public in this outfit was quite a different story for several reasons.  The picture itself as you can see, is essentially what I call- a picture of a picture-taken from a mirror reflection. It wasn't a "fake", but an adjustment designed to garner all the false adulation one can get on line-which does us NO good in the public eye.

Now, lets take my "red" picture below for an example.  I was getting a little better with my "poor person's" photo manipulation.  It's a blurred mirror shot too...without showing the camera. Nothing new about the process, just check out the close ups of the famous movie actress's of the 1930's and 40's.

Bottom line though, although I did feel as if these pictures made me look better than I actually did, they were only moments in time.  My feminine life was maturing and I was moving on. 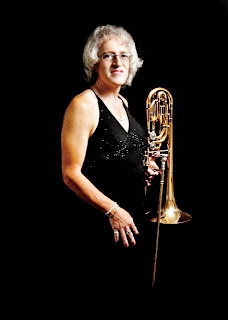 Now, let's get back to pix and one I originally saw on Femulate from Paula Goodwin (left).  I positively love this!  I see a proud transgender woman in her musical element and the strength in her eyes! I could go on and on about Stana's and Janie Black's photo's and not even scratch the surface of trans women who also are able to present themselves wonderfully with a picture!

As far as I go, I can only say, I'm kind of working on pix,  and was pushing my very talented and creative partner Liz to help. She took the easy way out and just underwent major shoulder surgery. So, she will be "one arm short" for a couple months.  Excuses-excuses!!!

Perhaps for the first time in my life, I want the special picture or to which represents my spirituality with nature, writing, inner self etc.  I actually thought about sending in a picture to Femulate-but decided I don't have one which fairly represents where I am in life. To hell with looks.  Sadly, the subject was send in your fave photo and I don't have one-yet!

Finally, here is Mandy! Rightly or wrongly, I always look for a transgender person's picture who is not in the same room all time or a motel room- like Mandy!   OK, I'm a photo snob!!! 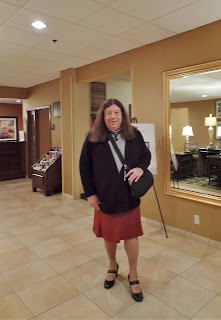