Every once once in a while, I happen across an article which goes into an ancient culture's belief in the "two spirits" gender identity.  In fact the acceptance of transgender people was common in many indigenous communities to the point they assumed the role of "shaman's"

My latest "discovery" comes from the New York Times and is called: Two Spirits in the Venezuelan Jungle By Jake Naughton  — Here is an excerpt: 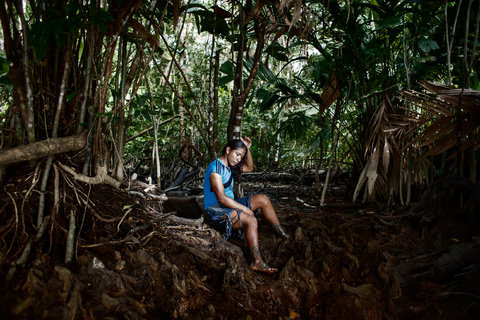 A chance encounter with an anthropologist in Caracas led Álvaro Laiz to Venezuela’s remote eastern edge, where an indigenous people known as the Warao have lived for millenniums. Mr. Laiz was intrigued when he heard about transgender women the Warao called “tida wena,” or, twisted women, because he had been working on a global project about transgender identities in nomadic and indigenous populations. “For me it’s about identity,” Mr. Laiz said. “The kind of things that make you the way you are.” Like other women, the tida wena tended to the home, cooked and cared for children and elders. They also participated in the harvest of important crops, like the ocumo chino, a starchy tuber. Historically, tida wena were sometimes the second or third wives of polygamous men. They also occasionally performed the role of shaman — the Warao are deeply rooted in the shamanist tradition — and tida wena in particular are thought to possess two spirits, bringing them closer to the ancestor spirits that roam the jungle.

When ever I read of the number of cultures who embraced  the "Twin Spirits" (it's estimated to be documented in 130 American Indian tribes alone)  individuals, I'm at once shocked, saddened and frustrated at the lack of understanding we face in the modern world.  Even more so when you consider the bitter in fighting in our own community.

If you are interested in researching any of this, follow the link above, or search the subject on line.  It is very enlightening!

One person who I know has always researched the Twin Spirits subject in depth is a regular visitor to Cyrsti's Condo.  His name is Don and he is in the midst of medical issues. I hope you all can take a second to pass along some positive vibes to Don, from what ever spirit you worship.  Thanks!!!