In a recent Cyrsti's Condo post I referred to an experience I enjoyed when I met Stana of the Femulate blog fame - and as it turned out leg fame.  The post simply mentioned how her legs had guys bumping into walls.  I did make one mistake though in the post, she (Stana) is 6'2" without heels!  She is living proof you can be older -more mature :)- and tall and sow off those dynamite legs of yours if you do it right...
Here's Stana's comment:  Thank you for the very kind words, Cyrsti! And by the way, I am 6'2"
without heels!

I "calls em like I sees em Stana!" Speaking of "sees em."  For years I used to play the game of positioning myself where I could see over my wife's shoulder and still make eye contact with her when needed.  Of course she knew that too and it became sort of an a "cat and mouse" game.  When I met Stana, I just happened to be in a situation where the same thing happened!

Some time ago I posted a rhetorical question asking which transgender model would break the Victoria's Secret "trans barrier." Would she be Carmen Carerra or Andreja Pejic? (below)  Mandy Sherman's vote was- 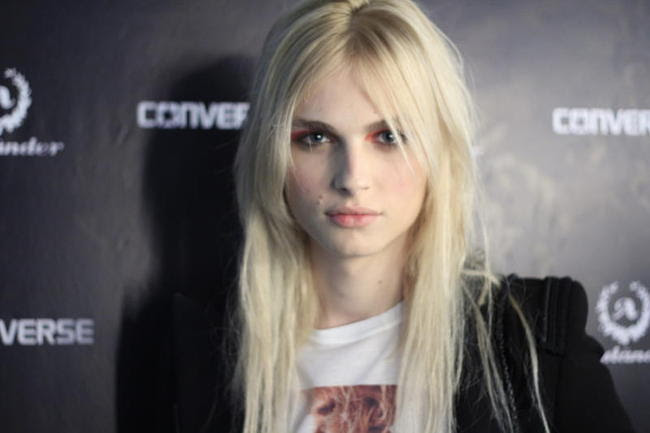 Both are gorgeous...but my vote's with Andreja. Just because...

I don't know Mandy but have a notion to lean with Andreja also.  Only because of her enormous amount of modeling experience, name and body style.  I think Carmen deserves it because she has worked harder at getting it but is blessed with a curvier feminine body which doesn't necessarily "mesh" with what Victoria Secret's marketing audience is.

Unfortunately, like everything else, it's as simple as "following the money."  Would signing either help their (Victoria's) bottom line?

Continuing my continuous quest to not keep putting my foot in my mouth (before someone else but their's up another part of my body) - at one point I did go back a change my reference to Stana's age as "more mature." Along the way I also made an attempt to refer to Paula's interests as "more unique."   She responded:

I like that "unique tastes"! Doesn't everybody like Gardens and Brass Bands?  Why yes Paula! I'm sure they do! (wink)

Spencer looks amazing! Really a natural. I'd be surprised if this was the first time Spencer wore a dress.

Yes! He certainly didn't just "throw this on" on hit the runway!  What really got me were his "poses".  He was either heavily coached or self taught to throw the shoulders back, rock the legs and work the runway.  Who knows, maybe his favorite show was Tyra Banks Top Model ?