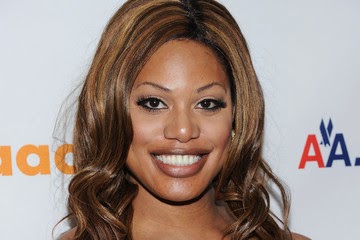 This morning, I just happened to have the CBS This Morning Show on my television. More importantly though, I just happened to walk in as an interview with Laverne Cox, the transgender "it" woman, was starting!  (In this case I use 'it' as the PR term for a person who is a hot personality.)  Laverne is on "A" lists everywhere and in demand. She is everywhere these days and even made the cover of Time Magazine!

I was fascinated.  "Trans fixed" you might say,  as I watched. Of course I have seen a "zillion" pictures of Laverne Cox here and there but pictures are notoriously bad these days at showing what a person really looks like-good or re-touched bad.  For whatever reason though, I had never seen her in the show "Orange is the New Black."  or on a recent interview on "The View".

So, this morning, I was able to put the pictures I had seen of Laverne Cox in motion. I was able to see her in a blue beautiful sleeveless dress which showed her from a side angle for a while as she was interviewed.  It gave me "perspective" on how her entire body has made the Mtf gender transition.  I positively loved the way she looked with her hair and smooth "caramel" colored skin but I also loved the fact she was a big woman.  Quickly and selfishly, I could see a portion of her transition in me.

What I mean is, no matter how beautiful she is,  if I lived in a vacuum and never had heard or seen Laverne Cox before, my Trans Dar would have been going off.  Please understand I'm not being negative! She gave me hope that while I never hope to achieve her looks, I can achieve her feminization and attitude.

As I watched , I understood again a little more,  what people see in me. Sure, it will be always fairly easy for the world to take a look at me and make the determination I have a physically male boned body-but some how it took a decidedly feminine right turn along the way. Again, the Laverne Cox's of the world are making my itty bitty corner of the world nicer to live in. I put her up on a higher pedestal than say an Andreja Pejic  who I sense most of the world will think, he was always a girl anyway.

Finally, watching the co-hosts on the show was almost as fascinating as watching Laverne herself.  I watched the looks and eyes of co-hosts Gayle King and Norah O'Donnell and they were in her spell!  The third co-host, Charlie Rose was in his typical nearly asleep / very intelligent mode. He barely even got in his is there a "transgender movement" going on.  Laverne simply said (I paraphrase)  "there always has been one!"

Yes there has! (Wake up Charlie!)