Needless to say the headline "Thor is now a Woman" caught my attention last night when it flashed across my phone. We can only hope this morning, transphobic action comic readers are shaking their heads in disgust!  Is nothing sacred? 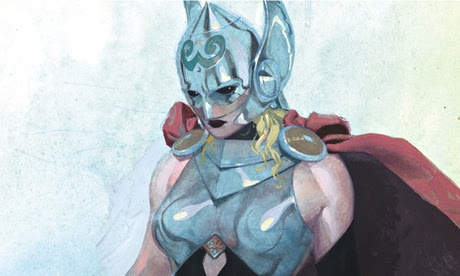 "Forget David Cameron's much-heralded move to bring more women into the cabinet. Marvel Comics trumped No 10 on the same day by announcing that one of their most established male characters is changing sex.

Thor, who debuted in the Journey Into Mystery title in 1962, has also been the star of two movies in the latest Marvel big-screen series; plus he played a pivotal role in the Avengers cinematic adaptation.
It's hard to imagine a more masculine character than Thor, who is based on the god of thunder of Norse myth: he's the strapping, hammer-wielding son of Odin who, more often than not, sports a beard and likes nothing better than smacking frost giants.
However, Marvel says that a new series written by Jason Aaron with art by Russell Dauterman will re-cast Thor as a female character. The comic, launching in October, is billed by Marvel as "one of the most shocking and exciting changes ever to shake one of the 'big three' of Captain America, Iron Man and Thor"."