The Future is Now?

For a transgender person of my age demographic, stories such as this from Yahoo News  simply are amazing.  It seems, groups of younger people are working to broaden or eliminate the whole idea of the gender spectrum.  All of the sudden, the old transexual, transgender and crossdresser hierarchy, is becoming irrevelant according to Genny Beemyn, director of the Stonewall Center at the University of Massachusetts, Amherst who recently wrote:  " the vast majority of students who identify under the trans umbrella identify in some way outside the binary, and that's really causing a shift on college campuses" .  Of course there is much more to the story from Yahoo: 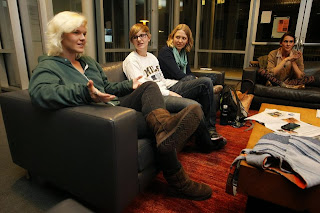 OAKLAND, Calif. (AP) — The weekly meetings of Mouthing Off!, (left) a group for students at Mills College in Oakland, Calif., who identify as gay, lesbian, bisexual or transgender, always start the same way. Members take turns going around the room saying their names and the personal pronouns they want others to use when referring to them — she, he or something else.

It's an exercise that might seem superfluous given that Mills, a small and leafy liberal arts school historically referred to as the Vassar of the West, only admits women as undergraduates. Yet increasingly, the "shes" and "hers" that dominate the introductions are keeping third-person company with "they," ''ze" and other neutral alternatives meant to convey a more generous notion of gender. "Because I go to an all-women's college, a lot of people are like, 'If you don't identify as a woman, how did you get in?'" said sophomore Skylar Crownover, 19, who is president of Mouthing Off! and prefers to be mentioned as a singular they, but also answers to he. "I just tell them the application asks you to mark your sex and I did. It didn't ask me for my gender."

Of course the transgender topic was involved too:

The nods to novel pronouns and nonconformity are an outgrowth of campaigns for gender-neutral bathrooms and housing that were aimed at making campuses more welcoming for transgender students moving from one side of the gender spectrum to the other. But as fewer young people choose to undergo sex reassignment surgery, such students are slowly being outnumbered by peers who refuse to be limited.


What's the world coming too??? A MUCH better place!   And just when you think this pronoun/language issue is getting to be a bit too complex:

Mel Goodwin, youth program director at the gay and lesbian community center in Las Vegas, said getting the hang of alternative pronouns can be tricky in conversation. Goodwin, 28, claimed they as a preferred pronoun four years ago and it took time "to unlearn what I had been taught about gender." Yet when people object to they as being grammatically incorrect, Goodwin counters that modern English is to blame and that scholars, writers and linguists have spent more than a century trying to come up with gender-neutral pronouns that stick. In public presentations, Goodwin also refers to a map that shows historic and contemporary cultures around the world that have recognized more than two genders. "This is not about young people in the U.S. over the last 20 years kind of coming out of the woodwork and making up labels that aren't real," Goodwin said. "This is a real variation among humans, period."

Well, it's time for old dinosaurs such as me to head off for my nap- feeling good about the future!