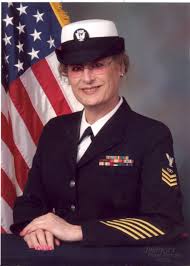 All you regular peeps here in Cyrsti's Condo know I am a transgender vet and follow Autumn Sandeen's (left) views on the subject with great respect.
Following transgender Navy Seal Kristin Beck's coming out party and book, I was anxious to read Autumn's take on the whole situation. To fill you in, Autumn is truly a ground breaking trans vet fighting what often I'm sure looked like a very lonely fight.

Here's an excerpt of what she said:

"I’d like to comment on instead is the implications of her story on the broader movement toward open service for trans people. One of the many arguments that were made by the LGBT public policy organizations, such the Servicemembers Legal Defense Network (SLDN) and the Human Rights Campaign (HRC), was that we wouldn’t want to discharge hardcore fighting corps, such as SEALS and Army Rangers, just because they were gay. America would be removing tough, smart, well-trained soldiers out of America’s special forces for a reason that had nothing to do with whether or not they were effective at doing their jobs.

That’s an effective narrative, but the LGBT community never had any former SEALS or Army Rangers it could point to and say, “And this is the kind of special forces soldier you’ll kick out of the military if they said they were gay on active duty.” In the trans community, we do have such a soldier now. We can now point to Kristin Beck and say, “If Senior Chief Beck came out as transgender while she was in the Navy SEALS, she would have been kicked out for a reason that had nothing to do with whether or not she were effective at doing her job. Is that what America really wants?” And is it?"

Allow me to paraphrase and get you to her actual statement but Autumn points out there are questions for an open trans military service AND the the preliminary work has been set in motion for a national discussion. Such as (from her previous column) the narratives of trans Department of Defense (DOD) contractors and civilian employees who’ve recently served in Middle Eastern combat zones – narratives such as those of Nicole Shounder, Rachel Bolyard and Erika Stetson.

Then there’s (Autumn's) narrative about her historic fight to have her recorded gender changed in the DOD databases. Huge, in that it showed that the DOD  acknowledged that trans servicemembers and veterans even did exist. Fortunately, this seems to be just the tip of the iceberg and hopefully the hypocritical transgender ways of the Pentagon have first class seats on the Titanic!