Today was therapy day so I have limited opportunities to post. So I decided to go back to the Fall of 2020 for this post:

As transgender women and/or crossdressers, we spend much of our lives wondering how we ended up being a person who has such non normal urges. Or so we feel. I know I lived so many years wondering how I was the only one I knew who had the peculiar habit of wanting to cross dress in clothes of the opposite sex (women). Then, first I learned through magazines such as "Transvestia" which was started by "Virginia Prince" in the 1960's and later through the internet, I was far from being alone. 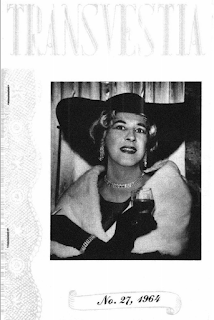 However, the feelings of normalcy persisted. I finally learned no one was truly "normal" and I learned to embrace my true self. Last night, during another virtual meeting of the transgender/cross dresser support group I am part of, I found out once again how normal I wasn't. Out of the ten or so attendees last night, I was the only one who made it to the point where I live full time as a transgender woman. Many of the others were really bemoaning the fact their weekend trips out as a cross dresser had been seriously curtailed, or stopped all together by the virus. I too, don't like it but the fact remains I know what gender I am when I wake up in the morning.

To look at the process from a different angle, let's bring in Connie:

"I was reminded of Transgender Week of Awareness last Friday, when a local newscast mentioned it. At first, I thought it was funny to start a week on a Friday, but then I realized it is so that it would culminate on the third Friday of November - which is Transgender Day of Remembrance. I actually joked to my wife that it was a good thing for the news to remind me that I was trans, and needed to be made aware of it. Really, though, I don't think there are any activities in Seattle until tomorrow - TDOR. That will be virtual this year.