And the Answer Is... 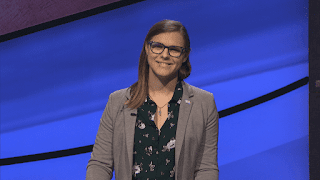 She is a financial analyst from Lake Orion, Michigan. Jeopardy has been on the air since 1964 with more than 8,000 episodes.  At least one other contestant has transitioned in the past after winning the game but Kate is the first out transgender person to do it.