Actually I should rephrase the title and write "My last Halloween Post". 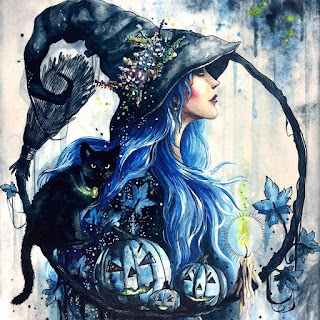 As I had previously promised, I decided to save my best Halloween experience for last. This Halloween occurred when I was a local disc jockey in Springfield, Ohio. The party invitation directed myself and any guests to an old restored Victorian mansion. I found one of my co-workers (a news person) and female was invited also. I love it when a plan comes together and now I just had to talk my first wife out of wanting to go.

Of course I was beyond excited at the invitation and of course I needed to figure out exactly what my "costume" was going to be. By this time in my Halloween "career" I had progressed from glitzy to desiring to present as a cis woman at the party. Since I had arrived at this spot, it was much easier to rummage through my wardrobe to find something to wear. It was basically what I was wearing at the time when I went out on the rare times I could try out the feminine world. In a very short time, I knew exactly the outfit I was going to wear.

On the much anticipated evening of the party I had gone through all the necessary prep work I needed such as shaving my legs, applying makeup and combing out my wig. Finally, it was time to meet my temporary date for the evening and we headed out to the old mansion where the party was being held. First it was the reaction of my "date" for the evening which got me started off on the right step. As she saw me, first she was incredulous at my transformation then she settled in with no problems. We were fortunate in that we arrived early and was able to find a close parking spot so my heels would not have a chance to bother me so much.

The mansion itself looked tremendous. In addition to the natural beauty of the home, the decorations included a coffin with a real skeleton. Since I was was really into restoration in the town, the owners knew me quickly and similar to my companion for the evening were amazed at the feminine transformation. As far as I went, I was enjoying the attention I received.

As the evening progressed, more and more new guests arrived. Including a couple I vaguely knew from his background as a local politician who was running for an office in Washington, D.C. He was with his wife who later approached me and said they had no idea I wasn't just a well dressed woman who stopped by the Halloween party. Naturally I was on cloud nine when the couple took it all a step further and asked me to go with them to another party.

It was one of those times I wondered what would have happened if I had made the opposite decision. Because my "date" was doing the driving and I still was worried about abusing my wife's feelings, I said no. Who knows? Maybe a potential career in Washington was defeated with my decision.

Regardless, I achieved what I set out to do. For the briefest of moments be mistaken for a cis woman.

If you celebrate, I hope the Halloween season has been festive and fun for you this year!