It has been awhile it seems since I have written on any of my past experiences which directly led to my coming out of my closet and into the world as a transgender woman. Several happened in small lesbian bars which seem to be disappearing these days.

One of the bars was basically a hard core biker bar and they did not like me, To put it mildly but on the other hand they still took my money and served me. I was just stubborn enough to keep going back and even playing Shania Twains' I feel like a Woman on their jukebox, I found it humorous when they found no humor in my musical tastes. Through it all, I was never asked (or told) to go. So I kept going back until I found another venue. 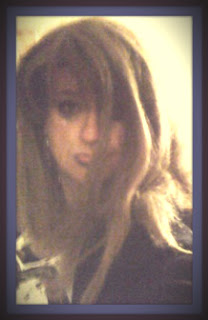 The second place turned out to be a much more welcoming spot. Part of it was it turned out my male self knew one of the bartenders and to my knowledge she never shared my secret life with anyone. Even to a few of the other customers. I always assumed everyone knew I was a cross dresser but never volunteered the information. Along the way I had several very interesting encounters.

For this post I have added a very old picture showing a little how I looked when all of this was going on. Normally I wore tight jeans, a nice top with heels or boots depending upon the weather. Topping it all off was my favorite blond wig. I guess I was trying my best to an "lipstick lesbian" look.

One night it worked when I was approached by a woman every bit as tall as I and she bought me a beer. Then she said she should take me home with her. I quickly panicked and thought what was I going to tell my wife who was still very much alive at that time. She was working a night shift that evening so I only had a certain amount of time to have my fun and head home. Then once I got home I had to try to remove any stray makeup so presumably she wouldn't know I was out again leading my double life as a novice transgender woman.  I figured she wouldn't buy the excuse I was kidnaped by a scary/ vicious lesbian.

It turned out to be another night when  I seemingly could have been forced into doing something against my will. Before I get into what happened, here is my disclaimer. I am a terrible singer and don't subject myself or others to the torture of my singing. One night though when a very stout, butch lesbian in a cowboy hat came in the bar during karaoke night and picked me to sing with her. Of course I tried to politely decline but she wasn't really giving me a choice  Again I panicked and wondered what I had gotten myself into. The only saving grace I had was my new "cowboy" friend was giving me the choice of songs I wanted to try to sing. The only karaoke song I had ever tried was a David Allan Coe  tune called "You Never even Called me by my Name." If you are familiar, Coe can't sing well either.

Having chosen my ballad, we did actually sing. Which is probably an insult to the sing word. Having finished she turned to me and said my voice was actually lower than hers. About that time, I saw my chance at freedom. She went for another beer and I paid for mine and vacated the venue quickly. As luck would have it, I never saw her again. I also never sang again.

The only other time I wished I could have stayed for was when the owners arranged for several exotic dancers to visit the bar. I waited as long as I could to check out the fun but had to leave before the dancers arrived.

Sadly, small lesbian venues seem to be disappearing everywhere leaving one less place to go and have a good time. Or, sing like a bird.