Do you know what the game "Tetherball" is? Basically it is a ball secured by a rope to a pole. When the ball is hit by a hand it comes back round to you. Of course it can be played by more than one person. 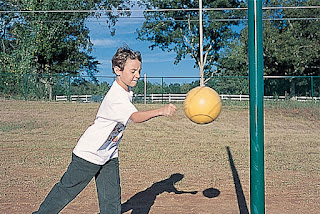 When I heard the game discussed briefly this morning on a PBS television show I was watching, I thought of what it meant in relation to a transgender woman or trans man.

I was intrigued and thought of gender replacing the ball in our game of life. For awhile we can be fortunate and the gender ball smoothly comes right back to us. During it's circle there was no one to stop it by saying the wrong thing and ruining your day. The problem is it can be so much more than just an outsider who can destroy the smooth rotation of the gender tetherball as it swings back to us.

Take for example, the gender dysphoria many of us suffer from. Through no fault of anyone other than ourselves, we can have our lives turned upside down when we have to live through the gender hell of not having our feminine souls sync with who the world sees us on a daily basis. Recently my gender game has been relatively smooth because I think my inner gender has been syncing up with who the world has been seeing. However, those feelings can be destroyed in an instant by ill advised side look in a mirror. It's similar to the gender ball hitting me in the face.

Seemingly the only way I can correct the problem is by going out in the world and proving to myself I can present myself as a feminine person. Once it happens (or if it does) I can get back in the game until it happens again. My gender dysphoria has proven to me time and time again it will.

An example happened to me this morning when I went to visit the vampires at the Veterans Administration clinic to have my blood labs taken. During the brief time I was there, I happened to look up in the waiting room and see a man waving at me. Also the tech who drew my blood took the extra time to "mansplain" to me all the tests he was doing. A sure sign they were booth reading feminine when they interacted with me.

All it really matters is the realization I am tethered to being transgender the rest of my life. Of course it is not a blinding sense of reality to figure out something I should have known years ago.

Oh well, living in the past is just another case of getting hit in the face by the ball. One thing for certain is "Transgender Tetherball" is not a fun game.