This is one of those experiences which came from being in the right place at the right time, which never was one of my strong points during my gender transition. Plus, it happened approximately seven years ago so I have a difficult time thinking it ever happened at all.

It all started innocently enough when Liz and I went to what can only be described as a working artist/crafters mall. It was/is located in a vintage brick shoe factory in downtown Cincinnati. My partner Liz is a quality crafter and was keenly interested in what the many shops had to offer.

As we slowly made our way through the venue, we came across a photographer and her friend who just happened to be putting together an album of the different types of women they could find. Then their effort would be judged in Chicago by another group. Before I knew it, they were strongly suggesting I should become a part of their photo shoot.

Of course I was flattered they wanted me to be a part of their compilation. And thought it was a great idea to include a transgender woman as one of the different women who can be found in the world. But then the doubts and misgivings began to filter in. What would I wear to the photo shoot? How much makeup should I wear were just two questions I had. My fears were not justified though when they gave me instructions on what to wear, including makeup.

In a short period of time, I found myself being photographed by a real live professional. While I loved the attention, I was scared to death! How would the pictures portray me and how would my gender dysphoria react. Before I knew it, my time as a photography model was over and I headed home. 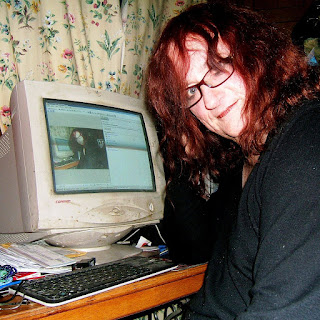 It took a couple weeks before I saw the results and I was indeed disappointed. Somehow I thought I would look better but what you see is what you get. I used to have the exact pictures they shared with me but try as I might I can't find one. So, the one I shared in this post is close to the same time period of my life.

None ot it mattered as the entry they put together and sent on to the Chicago competition didn't win anyhow.

My input wasn't over though as I as well the other models were invited to a gallery presentation here in Cincinnati. When I went, I promptly made my presence known by spilling a glass of wine all over the catering table.

Even though we didn't win any prizes, I will always remember my all too brief role as a photo shoot model in 2015.