It's Your Day Too!

Since it is International Woman's Day, it's a great time to recognize it is for all women. The day includes out transgender women plus all of you who still are trapped in your gender closets. 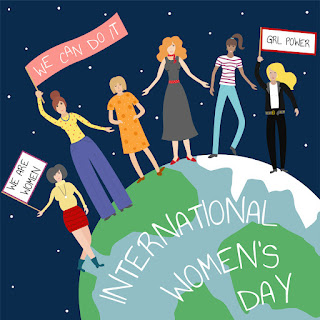 I am sure there are many cis women who may disagree but I am completely biased when I say I consider myself a woman to be reckoned with. After all I spent all those years as I lived a lie living with toxic masculinity. Cis women weren't born women, they were born female. It's a major difference. The socialization aspect of growing into gender roles is the deciding factor.

In fact, our growth into women has been complicated by factors such just living in the feminine world. The first lesson I had to learn was looks weren't everything...communication was. And, to complicate matters even further, I had none of the feedback cis women have on clothes and makeup growing up. I experienced plenty of growing pains.  In my own way I grew up with makeup, I just had no one to tell when I looked like a clown.

Don't forget you have as much of right as anyone to claim the title of woman. I know in my sense, I always felt so natural being in the feminine world. On the other hand, just staying competitive in the male world was always a struggle. It was especially difficult to give up my male privilege's because I had worked so hard to get them. Along the way, I was fortunate to work in an industry where women were starting to succeed so I could see and hopefully understand what they went through.

What I don't understand is why some cis women don't want to allow us access to the "womyn only spaces" When we worked so hard to get there. Isn't the idea of the more the merrier relevant instead of the outmoded idea of we are just feminized men trying once again to somehow invade their rights.

I agree too with Stana of the Femulate blog that the future is feminine. Hopefully, less toxic masculinity in the world can lead to fewer instances of tragic wars like we are seeing in the Ukraine right now.

I need to stress one more time how International Women's Day impacts all of us in the transgender spectrum. Even those of you who are attempting to open your gender door and live as your authentic self. When it does happen for you (and it will), together we can make the world a better place to be.