Recently I read a post describing a person's battle with gender dysphoria in their younger years. I wish I could contribute it to a certain person but for the most part I can't remember details from last week. So I just can't.

What I do remember from the post really hit home to me when the author described the torment they went through growing up trying to figure out if they were a boy or a girl. Way before the term gender dysphoric was even used. Or knock knock was I a boy or a girl.

As many of you probably remember also, the pain and torment of the two binary genders was very real. I describe it as being the round peg being pounded into the square hole. I know I would wake up on more than a few mornings deeply disappointed I was still a boy. Especially after having a dream I was a girl.

Another example was one of the vacation trips we went on to Canada from our native Ohio. Along the way there is a very boring stretch of highway between Detroit and Toronto. Normally about this time my younger brother and I were about ready to harm each other but on this particular trip I still remember the young girl who was probably close to my age that we kept passing on the four lane road.  Initially I was fascinated with her then completely jealous. Why couldn't it be me with all that hair and pretty face? Finally we passed their car for the final time and she was out of my life forever. I ended up putting my pillow over my head and tried to sleep my frustration away. 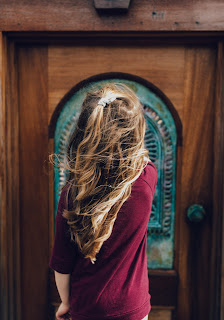 My "knock-knock" which gender am I didn't become obvious until many years later. Sadly, or even tragically, I spent years denying my authentic feminine self. One night when I went out to be alone, I sat and pondered my future. By this time, my wife of twenty five years plus three of my best friends had all passed away. As I sat there in my makeup, wig and clothes I felt so natural that I finally said to myself why not transition. What else is there to lose. So I did.

I finally followed my instincts at the age of 61 and set out to discover the true me.

What I found was terrifying yet thrilling. Here I was with a chance to reinvent myself. Plus, have a chance to do it as my authentic self. The person I was destined to become all along. Deep down inside I knew it but was so afraid,

Knock Knock! I'm home. A fully out and proud transgender woman. The wait was worth it. I didn't do it alone though. Thanks to all of you who helped!