Are You a Transphobe?

As I search through a few of my past archives from a couple years ago, every now and then a post jumps out to me as still being very relevant today. This post seems to be a contradiction in terms...except it is unfortunately not.

" Even though it sounds like a contradiction in terms but in the transgender community you can definitely think transphobia is possible. It could come from two sources. 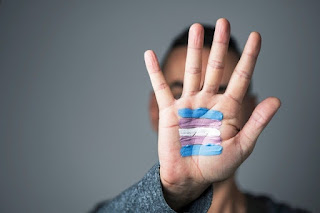 The first of which are left over male vestiges from a Mtf gender transition. Take Caitlynn Jenner for example. Knowing fair well the incoming Republican candidate was anti trans, she still supported him anyhow. She couldn't do away with all her previous male life, even if it meant protecting future transgender rights. Most certainly cis women support Republican ideas too but does their phobia's come from different places than men. Most people think women are the kinder and more gentle gender aren't always correct. I have known too many trans women who still can't leave their male past behind for any number of reasons.
I think too, much of this relates to the "I'm more transer than thou" attitude, another reflection of latent transphobia.
In our earliest cross dressing days, many of us (including me) fixate so totally on looking feminine, we do lose fact of what being feminine is all about. However, all the operations in the world, can't "teach" you how to be a cis woman. You have to live it, like they did. At this point, good old male competitiveness sets in. More operations and/or a nicer wardrobe make you more of a "woman" than the next trans woman.  Maybe the people who still advocate for going stealth to escape the community are right.
Plus, it is exceedingly difficult to cross the gender frontier and it takes more than a little internal fortitude to do it. If you able to come through it unscathed as a human being, you have done well. As we all know too, there are so many different layers to being a cross dresser all the way to living full time as a transgender woman. I am one myself as I am relatively rare in the circles of people I know. I have been able to carve out a successful life living in a feminine world. Without the expense or pain of any operations. To each their own though, I have one dear friend who had her genital realignment surgery postponed at the last possible minute because of the Ohio Covid Virus restrictions on elective surgeries. Daily, I hope for the day she can finally realize her dream of have the gender confirming surgery. Like her, it is easy to get stuck in the complex layers of who we are.
Before we know it, if we are not careful, we can become transphobic without even realizing it. "

I know I happen across feeling transphobic on social media quite a bit. Especially when I see a series of heavily filtered or doctored up pictures of a certain individual.  Then I step back and realize it was society's pressure on women as a whole to present a good a picture as possible.
Plus I was guilty of the same thing when I was a novice transgender woman.  The picture you see here was one of my earliest attempts at using filters. Even though my main "trick" was to take a picture of myself in a mirror with (as you can see) a lot of hair.
So, as you can tell, I have to look closely at my own feelings when it comes to internalizing my own transphobia.  If I am not careful, bits and pieces of my old male self can bleed through. Recently I have had to force myself into reestablishing my connections with the transgender - cross dresser group I am a member of as well as rejoining a veterans LGBTQ group I was once a part of.  By doing it I can re-engage myself to new people and ideas. In his later years, my Dad essentially became a hermit and I don't want any of that.
Maybe also you can be a transphobe and not realize it. If you catch yourself thinking you are transer than another person, it's time to take a look at yourself and change.
at February 07, 2022